Call of the Colosseum Slots 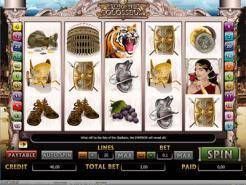 Play Now
The excitement and historical themed Call Of the Colosseum Slots are sure to become a favorite game for new players and the seasoned gambler alike. The graphics on the game really do set it apart from many other types of slots and the symbols on the reels are definitely going to have you thinking back to times of gladiators, emperors and chariots.

The game format for Call of the Colosseum Slots is similar to other five reel twenty payline slots. Whit isn't the same is the amount that you can bet per spin. The player can determine the wager amount from as little as one cent per line to as much as a maximum bet of $500 per spin. The more you wager the more you will win based on coin payouts and active paylines.

Like many of the new styles of online casino games, Call of the Colosseum Slots features all graphic symbols, no number or card values. This adds to the visual appeal of the game as you watch for the symbols to line up across the reels. Symbols include coins, Roman sandals, shields, the Colosseum, bags of money, a snarling chained tiger, grapes, chariots, a beautiful woman with a rose and the emperor himself. The more symbols you match from left to right across the reels the greater your winnings based on the coin value wagered. Some symbols require a minimum of three of a kind to pay out bu the girl, tiger and the scatter shield symbol will pay out with just two. The Emperor acts as the wild symbol, substituting for any other symbol except the scatter shield when used in a winning combination. Look for the regal Emperor on reels 2, 3 and 4.

Free games are triggered when three or more shields appear on the reels. During the 12 free spins your winnings are automatically tripled, really adding to the potential for a lot of cash. However, that isn't the end of the benefits during the free games. When the Emperor symbol appears he will give the thumbs up or down sign, the thumbs up sign will automatically add another one to three games onto the free spin games. Playing Call of the Colosseum Slots is a great way to pass some time, see some terrific graphics and win some serious coin. And the best place to play Call of the Colosseum Slots is LibertySlots US Casino ! note: if you enjoy Roman themed games check out bodogslots , Crazy Slots Casino , Silver Dollar Casino and Super Slots Casino for other similar themed slot action.
Play Now

Where to Play Call of the Colosseum Slots