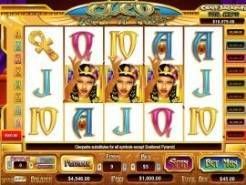 Play Now
If you are a history buff with an interest in Ancient Egypt, then the virtual location of the fabulous Cleo Queen of Egypt “Crazy Jackpots” video slot game by online software and game developer CryptoLogic is sure to become one of the first stops you make at your preferred online casino that features these fine games. Why? Well, Cleo “Crazy Jackpots” Slots is Egyptian themed and graphically superior, with everything from pyramids to hieroglyphics well represented in the game. You’ll almost feel as if you have stepped back into the days of the Pharaohs as you feast your eyes and ears on what this game has to offer. Join and play Cleo now.

The reels are edged in a gold frame that is set in between stone columns that are covered with the graphical characters known as hieroglyphics. Reel symbols include a Pyramid, King Tut, an Ankh, Anubis, and the Eye of Horus. Others include an Ace, King, Queen, Jack, and 10 reel in a neat Egyptian style font. Cleopatra is the game’s Wild Symbol, and this icon substitutes for any of the other reel icons except for the Scatter symbol, which is the Pyramid. The Wild symbol will not activate the Cleo "Crazy Jackpots" Bonus game.

Nine Jackpots for Your Winning Pleasure

Another reason players take to Cleo “Crazy Jackpots” Slots is because the game is known by slots fanatics as the first video slot game in the world to have both five reels and nine jackpots, and crazy ones indeed, for these are progressive jackpots, one for each of the nine paylines. The progressive jackpot combination of five of the Cleopatra reel symbols triggers the Crazy jackpot for that particular line.

This is one of the most enjoyable parts of the entire game. Three or more Scatter Pyramid symbols landing anywhere on the reels triggers the Bonus level of Cleo "Crazy Jackpots". To play, select the different hieroglyphic symbols on the screen until you hit a trap. Bonus winnings include coins and multipliers. The value of the multiplier is added to any of the coins won during this segment of the game. Once the Bonus game is over, you’ll go back to the regular Cleo "Crazy Jackpots" game screen.

Wagers allowed in Cleo "Crazy Jackpots" range from five cents to $5.00. The regular jackpot for the game starts at 40,000 coins. Essentially a nickel slot, the Egyptian themed game also includes Autoplay. Why not play Cleo "Crazy Jackpots" and try your hand at nabbing one of those nine jackpots at your favorite online casino today? For Cleopatra Slots lovers we would like to recommend one more fantastic game: Cleopatra Slot Machine Free Play
Play Now

Where to Play Cleo Queen of Egypt Slots