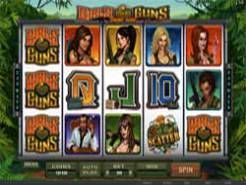 Play Now
The Girls with Guns Jungle Heat Video Slot is a brand new slots game from Microgaming that hit the screens in early 2013. In this fascinating slots game there are five reels and 243 ways to win. The main characters of this game are six combat girls with guns that fill the screens in their sinister yet rather sexy outfits as they hunt down the evil drug baron. Each of the girls has their own special personality and offers different winning options but when the group photo of all the girls appears on the screen on the third reel it turns the whole reel wild becoming an expanding wild and offering more winning options. The girls with guns logo is wild and this appears on any of the reels and can help make up one of the different 243 ways to win.

Three or more of the scatters grenade symbols awards players 15 free spins during which there is no multiplier as such but one of the reels turns randomly wild during the free spins giving players more winning opportunities. In addition the free spins can be retriggered at any time. Two of the grenade features on the screen will offer players a multiplying win of 2x the coin bet placed. Players can choose coin sizes according to their own personal budget with options ranging from $0.01 up to $0.05 and the option of placing up to 20 coins per spin. There is also an auto play feature where players can preset the number of reels that they want the game to run for consecutively. This is a game full of fire power and adventure, one that will surely stay popular well past the 2013 launch.
Play Now

Where to Play Girls with Guns Jungle Heat Slots