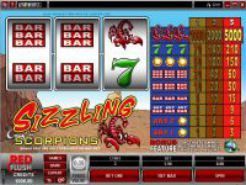 Play Now
Many of us run the other way when we hear or see a scorpion but this thrilling slots game will bring you closer to these unique and rather dangerous creatures. This is a three reel slots game with a single payline and a bonus game. Amongst the symbols you will find bright red scorpions, red 7's, bright suns, triple bars, double bars and single bars together with traditional cherries. The symbols are brightly colored and well defined and help make this slots game an inviting and exciting proposition.

Race the Scorpions in Bonus Game

Unlike many other slots game, Sizzling Scorpions Classic slots has a set coin size of $0.50 and you can place, one two or three coins per spin. Placing the maximum coin bet is always preferable as it brings in the highest winnings in addition to a chance to enjoy the bonus game. The bonus game is activated when a buzzard appears on the third reel when you have placed a three coin bet. In the bonus game you are taken to a new screen where there are three scorpions preparing for a race. Once you have chosen your scorpion the race begins and if your scorpion wins first place you win 100 coins, 2nd place yields 50 coins and third place yields 30 coins. The bonus game is a win win situation.

At the end of the bonus game you are taken back to the main screen to carry on playing the base game. In the base game the highest payout is awarded for three of the red scorpions on the payline, in this case you will win 5000 coins if you have placed a three coin bet. With two coins you are awarded 2000 coins and a single coin bet will award you 1000 coins for three scorpions on the pay line. The next highest payout is for three of the red sevens, with a three coin bet you are awarded 210 coins, a two coin bet will award you 140 coins and a single coin bet awards you 70 coins. Sizzling Scorpions classic slots also offers an expert option where you can set the number of spins that you want the game to run for and when you reach the bonus game you can interact and join in the game. Many of the casinos offering this slots game can also be played in flash ( at all slots flash casino ) or instant versions where you are playing directly from the website of the casino with no need to download the casino or game to your computer. Despite the deadly creatures that are the main feature, there is plenty of excitement and opportunity when playing Sizzling Scorpions Classic Slots game. See one more interesting bonus slot games Hunky Heroes Video Slots and Cracker Jack Slots
Play Now

Where to Play Sizzling Scorpions Slots