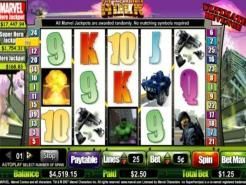 Play Now
The character known as The Incredible Hulk is familiar to children and adults all over the world. They have seen this Marvel comic book character appear on television shows as well as in movies. Let the kids have their fun with the Hulk toys and games that also are in abundance, while the adults enjoy themselves in an often-profitable manner by playing Hulk Ultimate Revenge Slots by CryptoLogic Software. The huge, muscled green Hulk is a perennial favourite with everyone! You will be helping the Hulk to gather items to be thrown at the helicopters intent on defeating the Hulk.

Hulk Ultimate Revenge Slots is one of a series of five Hulk slot games, and players claim that playing Hulk Ultimate Revenge has many benefits that keep them coming back for more. This five reel, 25-line video slots game has fantastic graphics, realistic sound, and animations that will make you think you have actually stepped into the game. You will be playing against a background of the city where the Hulk has already been heard at work battling helicopters and SWAT teams. Hulk Ultimate Revenge Slots is connected to not one, not two, but three Cryptologic Marvel jackpots. Betting the maximum will increase your chances of winning one of these jackpots.

The reel symbols in Hulk Ultimate Revenge Slots include a Swat Team, a Pistol, a Scattered Explosion symbol, a Radioactive symbol, a Hulk symbol, and a pair of broken Eyeglasses that belonged to the Hulk before he transformed. There is also an ominous Green Eye symbol that belongs to the Hulk, a SWAT Vehicle, a Golden Cloud Explosion, the Ace, King, Queen, Jack, 10 and 9, among others.

Are You Ready for Some Fun?