It's Good to be Bad Slots 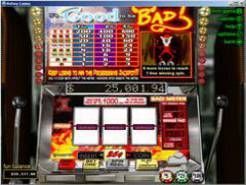 Play Now
It's Good to be Bad is an interesting video slot from Real Time Gaming (RTG). While it presents itself as a classic 3 reel video slot, it's anything but, and despite its simplicity its fast becoming one of the most played games at Bovada Casino . When you play video slots, it can be frustrating to hit a losing streak – but not in this game. It contains a major twist that actually flips things around: the more you lose, the more you win. Sounds confusing? Try on.

How to Win by Losing

At its core, It's Good to be Bad is a classic one armed bandit. It has three reels, and it uses mostly just the conventional graphics that you'd expect for a lot of this nature. Your coin choices are limited to either 25c or $1, and you can play up to three coins at a time. There are no additional lines, whatever lands on the center pays you. Playing this game is as simple as picking your coin size and number of coins, and pulling the lever. But if you play on max coin (3 coins per spin), the unique loyalty feature kicks in: when you hit a losing streak, you earn free spins every time you lose!

The images used on the reels of this game are pretty much as you would expect to find on an old school one armed bandit: cherries, bars and sevens. Any cherry wins, followed by two cherries, and a line of any bars. The next most valuable combo is three cherries, followed by lines of single bars, double bars and triple bars. The main jackpot in the game is triggered when you get a line of three 7s.

To qualify for the bonus feature, you need to be playing the game on 3 coins per spin. Since this also gives the most winnings, it's probably advisable anyway. Now, as we've already discussed, the more you lose, the more free spins you can win. Specifically, every 4 consecutive losses earns you 1 free spin of the reel. But there's more: this game has a progressive jackpot attached to it which regularly crawls into thousands and thousands of dollars. How do you win it? By losing, of course. If you hit an awful losing streak of 29 straight losses, you trigger the progressive jackpot! No other game that we've encountered rewards you as richly when disaster strikes.

Accept Only the Best

If you're looking for an online venue to take It's Good to be Bad for a spin, look no further than Bovada Casino . It is, quite simply, one of the best online gambling destinations online, and you won't be able to fault them on either choice or service.
Play Now

Where to Play It's Good to be Bad Slots