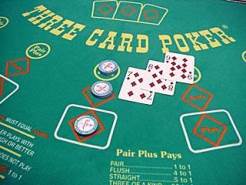 For the uninitiated, 3-card poker is a real treat you should check out. It started off as 3-card poker in one casino, and gained in popularity under the names Tri-Card or Three Card poker. Whatever you call it, it’s a lot of fun and you can play for fun or for money at our favorite places online: Bovada Casino, Bodog Casino, Silver Dollar Casino, and Super Slots Casino.

Using a single deck of standard 52-cards, Three Card Poker is played between the dealer and the player. In actuality, it is two poker games in one: "Three Card Ante/Play", where you compete against the dealer for the highest hand, and "Pair Plus" where you are betting on whether or not you will be dealt a pair or better. When both games are played at the same time, players may wager different amounts on each game.

Sounds complicated, but it is actually easy and we found it to be a blast, especially since there is no competition among the players as you are playing against the dealer and not each other!

How to Play Three Card Poker

To play the game, you have three betting circles in front of each seat. “Pair Plus” is the name of the top betting circle where the player wagers on the “pair plus” game. Beneath that are two circles labeled “Ante” and “Play” for the base game. The game starts with the players making their bets, and then being dealt a three-card hand.

If a player has made a bet on the Ante, they then decide to fold or play after looking at their hand. If the player folds, the Ante wager is forfeited. If the players want to continue, they must make an additional bet in the Play circle equal to their Ante bet.

After all the players have decided, the dealer turns over his/her three-card hand. The dealer needs to qualify with a Queen or higher for play to continue. If the dealer’s hand does not contain a Queen or higher, all players still active in the hand will be paid even money for their Ante wager and their bet on the Play will be returned to them.

How do you rank the cards in this game? As you are only dealt three cards, the ranking is a bit different from the standard five card poker hands.

The hands are ranked for the highest to the lowest as follows:

So if you have never played this exciting game, join Bovada Casino and see what you have been missing!

Play at the Best Casinos