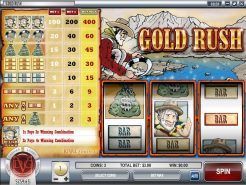 Play Now
Some software developers are far better known than others. We would argue that Rival Gaming should be put into that category. That is partly because they have been around since 2006 and have survived when other developers have disappeared. Today, they have over 150 games to their credit. While you will see older and more basic titles in their collection, you will also see some new and much-improved titles to play. So, how do they rival their nearest rivals?

Rival is home to the i-Slots series of games

No doubt you have heard of i-Slots. These are slot games that involve a story instead of just presenting you with a basic theme. The best example of this lies within the trilogy of games known by the main title As the Reels Turn. It is a soap-style series set in a casino – pretty appropriate for a slot game, don’t you think? Each game builds on the one before it. This is not the only example of a great selection of i-Slots games, but it is one of the undoubted highlights.

Three-reel slots will always be popular. If you fancy a change from a standard fruit machine, slots such as Big Cash Win look great within the overall Rival Gaming collection. Other slot developers also have some great three-reel games to play, but does Rival beat them all? Try a few and see.

Some of their games feature familiar characters

It’s not quite Hansel and Gretel, but the Candy Cottage slot certainly goes along those lines. This is a great example of a theme that permeates through every area of the game. It also features the double whammy of some free spins and a bonus feature. That is something you’ll find in many other Rival games too. They do not skimp on the features that players love to see.

Do they rival other developers or are they out in front?

We guess that depends on your point of view and your opinion of Rival and the developers you compare them to. One thing we do know is that Rival Gaming has released dozens of entertaining slots players love to return to. Maybe you will have fun discovering some of the titles in their collection. We doubt you will have trouble finding some favorites in there.
Play Now